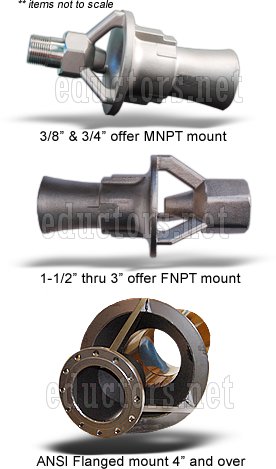 NCI Tank Eductors (also referred to as circulating tank eductors & tank liquid agitators) provide an effective way to mix liquids in open or enclosed tanks. They produce an intimate mixing action between the components of a liquid, while keeping the contents of the tank in constant motion. In many cases they produce a mixing action that cannot be duplicated using mechanical methods. Tank eductors can handle a variety of viscosities and types of liquids, including slurries and suspensions. Their thorough mixing action makes them especially useful for maintaining uniform liquid characteristics throughout the tank contents , such as temperature, pH , or solids distribution. The tank eductor is also used to prevent separation of non-mixable liquids or stratification of liquids having different specific gravities. Tank eductors offer low initial cost, lightweight and easy installation. They are inherently non-clogging and with no moving parts, require little or no maintenance . Tank eductors allow the use of a smaller recirculating pump than normally would be needed to move a given volume of liquid. This saves energy while providing more effective mixing and circulation. They are available in materials to suit a variety of applications in food, chemical, refining and other process industries.  related: see plastic tank eductors

Long, narrow tanks such as tank trucks or railroad cars, normally require multiple circulating tank eductors when the ratio of their length to diameter is greater than 2:1. This applies to horizontal or vertical tanks and for any shape of tank cross section.

Larger tanks of any shape may require multiple circulating tank eductors to maintain agitation in all parts of the tank.